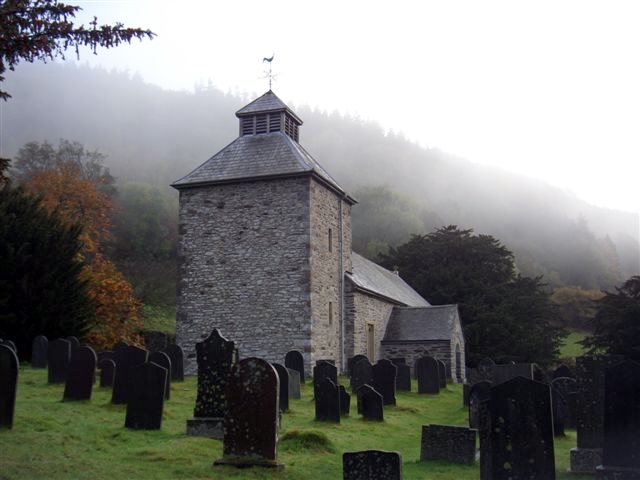 Some sites are definitely ancient, some are definitely pagan, some are Christian, some are blended, some are hidden and retain a wild feel. Where all this comes together is in the valley of Pennant Melangell in North Wales. Melangell was a female saint of the 7th century. According to tradition she came from Ireland and lived as a hermit in this valley.

The story goes that the Prince of Powys was out hunting and pursued a hare which took refuge under Melangell’s cloak. Subsequently the Prince gave Melangell the valley as a place of sanctuary recognising her saintliness and accord with the natural world. And that is what it feels like today: a sanctuary. Melangell became Abbess of a small religious community and after her death was honoured by the continuation of Pennant Melangell as a place of pilgrimage. Melangell is still the patron saint of hares thirteen centuries later.

There has been a Christian church at the site for over 1200 years and being set in the magnificent beauty of the Berwyn Mountains it has a steady quiet atmosphere. Its round churchyard points to there once being a stone circle on this point. Some of the surrounding yew trees are 2,000 years old by estimate. The shrine of Melangell is the ‘church’s greatest treasure.’ This was dismantled after the Reformation and its stones built into the walls of the church and lynch gate. They were re-assembled in the last century and are now in the church. This site is described as being of ‘pan-European significance.’ There is no congregation as such; it is a pilgrim’s church and visitors come from all over the world. On their website the church says, ‘Pennant Melangell is a place beyond words and far from the rush of 21st century life; a place where God speaks in the silence and where all people have an opportunity to experience a sense of the Holy.’

Location: Located on a minor road which joins the B4391 near the village of Llangynog, Powys, Wales.